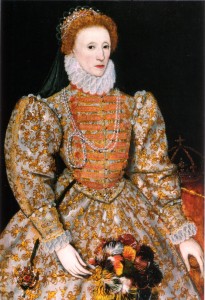 Elizabeth I Queen of UK

Elizabeth I Queen of England

Elizabeth I was one of the queens who ruled England and Ireland from 17 November 1558 until her death. Some people used to call her as “The Virgin Queen”, “Gloriana” or “Good Queen Bess” and Elizabeth I was the fifth and last monarch of the Tudor dynasty. Elizabeth I was born on 7th September 1533 at Palace of Placentia, Greenwich, England and she was died on 24th March 1603 at the age of 69 in Richmond Palace, Surrey, England. She was buried at Westminster Abbey on 28th April 1603.

Elizabeth I was the second child of Henry VIII and Anne Boleyn. She was born into the royal succession, but her mother Anne Boleyn was expired when Elizabeth I was at two and a half years old. Elizabeth I prepared out to rule by good counsel and she was depended mostly on a group of trusted advisers led by William Cecil, Baron Burghley. One of her first step as queen was the foundation of an English Protestant church, of which she qualifies as the Supreme Governor.

Elizabeth I was reign from 17th November 1558 to 24th March 1603. She was born in too many troubles. She decided not to marry in her life because if she marries a foreign man or prince he would put his own foreign rules and policies. If she marries her own country man he could have tried the Queen into conflicting competition. So she never married.

Elizabeth I was England national heroine and became an admirer. She as single person handled the reassembly of troops to motivate the victory on the Spanish armada.