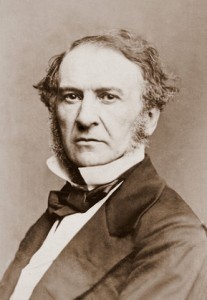 William Ewart Gladstone was a British Liberal politician in UK. In his career enduring over 60 years, he was elected as Prime Minister for four times i.e, 1868–74, 1880–85, February–July 1886 and 1892–94, more than any other politician. He was resigned as prime minister last time at the age of 84. In 1859 ,the Peelites combine with the Whigs party and the Radicals party to form the Liberal Party.

William Ewart Gladstone was born on 1809 December 29th at place of Liverpool, Lancashire, England. He was died on 1898 May 19th (at age of 88) at Hawarden Castle, Flintshire, Wales. His father was Sir John Gladstone and mother was Anne MacKenzie Robertson. Gladstone was forth son to Sir John Gladstone and Anne MacKenzie Robertson was second wife to Sir John Gladstone. William Gladstone was studied from 1816 to 1821 at a preparatory school at the vicarage of St Thomas’s Church at Seaforth, which was near to his home. He read Classics and Mathematics at Christ Church, Oxford in 1828, although he had not much interested in mathematics. In December 1831 he got the double first-class degree. Gladstone elected as President of the Oxford Union debating society.

Gladstone was married Catherine Glynne, they gave birth to eight children together. In December 1834, he was selected as a Junior Lord of the Treasury in Sir Robert Peel’s first ministry. He shaped his unique mark from the start and support junior offices in Robert Peel’s government of 1834 – 1835. Although he was interested in liberalism and slowly moving towards to liberalism. In 1843 Gladstone entered Peel’s Conservative cabinet. In September 1842, his left hand forefinger  was cut in an accident while reloading a gun. From that incident he wore a glove or finger sheath.