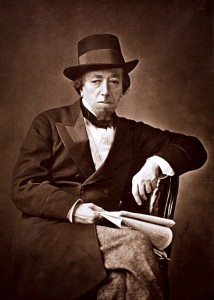 Benjamin Disraeli was 1st Earl of Beaconsfield and he was a British Conservative politician, novelist, writer, British statesman, aristocrat and he was elected twice as prime minister. He played a great role in the formation of the modern Conservative party, described its policies and its best. He worked as prime minister from 20th February 1874 – 21st April 1880 and 27th February 1868 – 1st December 1868 under monarch of Queen Victoria.

Benjamin Disraeli was born to Italian-Jewish parents on 21st December 1804 in London, United Kingdom and Died on 19th April 1881 at aged 76 in London, United Kingdom. His father was Isaac, a Jewish Italian writer. He started education at the age of 6 years old as a day boy in dame school in Islington. After two years, he was sent to boarder to the Rev John Potticary’s school at Blackheath. He was very affectionate towards his sister Sarah.

At the age of 20 Disraeli lost all his money in stock exchange. In the year 1839, Disraeli was married to Mary Anne Lewis and she was widow of Wyndham Lewis. 12 years Disraeli’s senior, Mary Lewis had a good income of £5,000 per year. Disraeli had 4 siblings; they were Sarah, Naphtali, Ralph and James.

In the year 1852, the Prime Minister Lord Derby gave chance in British government as Leader of the Commons and Chancellor of the Exchequer to Disraeli. Derby was resigned as prime minister in 1868, after this Queen Victoria called Disraeli to become a prime minister. In 1874 election, he elected again as a prime minister for second time.