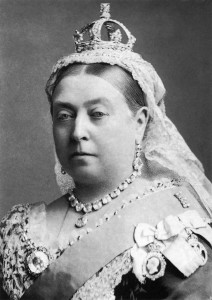 Queen Victoria was the queen and monarch of the United Kingdom of Great Britain and Ireland in between 20 June 1837 and until her death. From 1st May 1876, she was started using the additional name to her actual name i.e, Empress of India.

Queen Victoria was born on 24 May 1819 at Kensington Palace, London, died on 22 January 1901 at the age of 81 in Osborne House, Isle of Wight and burial at 4 February 1901 in Frogmore, Windsor. Her Father was Prince Edward, who is Duke of Kent and Strathearn and mother was Princess Victoria of Saxe-Coburg-Saalfeld.

Queen Victoria was got married in 1840 with her first cousin Prince Albert of Saxe-Coburg. Their 9 children were married to royal families and noble families across the continent of Europe. Queen Victoria annoying all of them together and got her nickname was “the grandmother of Europe”. Victoria learned drawing, painting and educated by a governess at home, she was a natural diarist or journalist and wrote a regular journal throughout her life.

Queen Victoria is correlated with Britain’s great age of industrial expansion, economic progress and empire. After her death, British people was said, Britain had a worldwide empire on which the sun never set. Her marriage to Prince Albert and gave birth to nine children between 1840 and 1857. Victoria had great attachment with her husband and she went into depression after he died in 1861 at her age of 42. She had lost a loved husband and her most principal believed adviser in affairs of state. For the rest of her life and reign she wore black cloth in her dressing. After these, she was appeared rarely in public but she didn’t neglect the official works as queen.