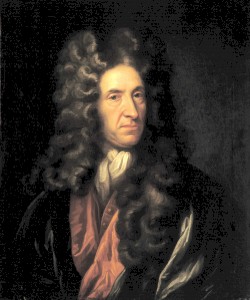 Daniel Defoe date of birth records not having exact information. But as per the sources born between 1659 to 1662, consider most likely in 1660 and died on 24th April 1731 London, England. Daniel Defoe father was James Foe who is prosperous tallow chandler. Daniel Defoe actual name was Daniel foe, later he changed his name to Daniel Defoe because of sound gentlemanly.

Defoe was studied at the Rev. James Fisher’s boarding school which is in Pixham Lane in Dorking, Surrey. Defoe completed graduation at Newington Green, organized by the Reverend Charles Morton.

In 1683, Defoe was entered in to the business world as a general merchant. He was dealing with hosiery, general woolen goods and wine. He was rarely out of debts. In 1703, he was decided to stop business.

In 1684, Daniel Defoe married to Mary Tuffley, who was the daughter of a London merchant. He was received dowry of 3,700 GBP. But the married life was most likely troubled. They together gave birth to 8 children, 6 of whom survived.

Defoe’s first notable publication was published in 1697, this publication discussed upon Projects, it was a series of suggestions for social and economic improvement. He continued his career as a political writer and journalist until 1700. Defoe many publications are supports to king William III.