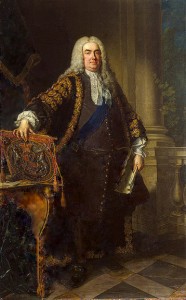 Sir Robert Walpole was born on 26th August 1676 at Houghton, Norfolk, England and Died on 18th March 1745 at the age of 68 in London, Great Britain. He was studied at Cambridge University and in the year of 1701, Robert Walpole elected as a member of parliament for Castle Rising in Norfolk, where his father had elected as MP. Robert became a MP from British party Whig, who was first elected to parliament in 1701. Walpole performed duties during the reigns of George I and George II.

On 30th July 1700, Walpole was married to Catherine Shorter, she was the daughter of John Shorter of Bybrook in Ashford, Kent. She was characterized as “a woman of exquisite beauty and accomplished manners”. They gave birth to 2 daughters and 3 sons. Catherine Shorter expired on 20th August 1737. After her death, Robert Walpole was married to his mistress Maria Skerritt in March 1738. They gave birth to one daughter, name was Maria.

The death of his father in November 1700, it made easier to his political career, as he took his position as MP for Castle Rising in the year of 1701. At the time of general election of 1702 he captured the seat at King’s Lynn. Walpole’s father had been a Whig, a promoter of the 1688 to 1689 ‘Glorious Revolution’ which gave Britain a constitutional monarchy.