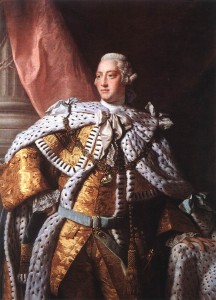 George III was king of Great Britain from 25th October 1760 to 29th January 1820 and also king of Ireland from 25th October 1760 until the merging of these two countries on 1st January 1801. After that he was king of Great Britain and Ireland until his death. George III was simultaneously duke and prince-elector of Brunswick-Lüneburg (Hanover) in the Holy Roman Empire until his promotion from prince elector to King of Hanover on 12th October 1814. George III was third British monarch of the House of Hanover. But different from his two Hanoverian predecessors because he was born in Britain, spoke only english language as his first language and never visited Hanover.

George III full name was George William Frederick. He was born on 4th June 1738 at Norfolk House, St. James’s Square, London and died on 29th January 1820 at the age of 81 in Windsor Castle, Windsor, England and was buried on 16th February 1820 at St George’s Chapel, Windsor Castle. George III parents were, father was Frederick (Prince of Wales) and mother was Augusta of Saxe-Gotha.

George III was grown up with healthy, very shy and reserved mentality. He done his education with private tutor and he can read and write in English and German languages. The first British monarch educated in science systematically at the age of eight years old. In his education life, he learned astronomy, mathematics, French, Latin, history, music, geography, commerce, agriculture and constitutional law, along with sporting and social accomplishments like dancing, fencing, and riding.